The History and Meaning of Our Holy Week Observances 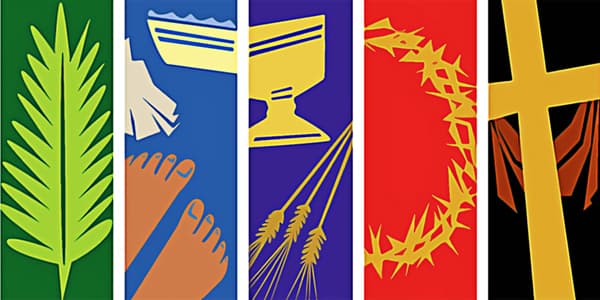 What is this thing we call Holy Week and the special days within it? What is the history of the annual celebrations that happen in this leading to Easter? In other words, though we know that the events that we remember during Holy Week really happened to Jesus (e.g., the procession into Jerusalem, the Last Supper, His death on the cross, His resurrection), when did Christians begin to annually observe them as we do? And, what is the significance of our observances today? This article attempts to offer a brief introduction.

As we now practice it, Holy Week is the last week of the 40 day season of Lent and the week preceding Easter. In Holy Week we focus on the last week of Christ's life, remembering especially His passion and resurrection. Though calling this week "Holy Week" is more of a recent innovation, the annual observance of the festivals within it are of ancient origin.

Palm Sunday is the commemoration of our Lord's triumphant entry into Jerusalem five days before His crucifixion. Scripture records this incident in Matthew 21:1-11, Mark 11:1- 11, Luke 19:29-44, and John 12:12-19. This day takes its name from the fact that as Jesus approached Jerusalem on a donkey (in fulfillment of Zechariah 9:9), the huge crowd that followed carried palm branches as they praised Him. The people hailed Him as the long awaited "Son of David," that is, the Messiah.

Though not annually observed at first, by 600-1000 AD Palm Sunday was being given full treatment, especially by Christians aligned with Rome.1 This treatment was part of a growing emphasis at the time to imitate as closely as possible the last days of Christ's life.

Palm Sunday has a dual focus today. Our service begins with a joyful procession with palms to remember our Lord's jubilant entry into Jerusalem. The hymns, prayers, and lectionary Scripture readings also reflect this joy. A second focus on Palm Sunday is our Lord's Passion. When this second focus is observed, the entire passion story (Matthew, Mark, or Luke) is read (in place of the sermon).

Originally, however, Passion Sunday was held two weeks before Easter (since the ninth century) and it began the two week period known as "Passiontide" in which special stress was placed on Christ's suffering and crucifixion. Actually, the two week Passiontide is older than Lent, having been observed since the third century.

Maundy Thursday (also known as Holy Thursday and Green Thursday) remembers the events in the upper room the night before Jesus died. These upper room events are described in Matthew 26:20-30, Mark 14:17-26, Luke 22:14-35, and John 13 - 17. Matthew, Mark, and Luke focus on the institution of the Lord's Supper and the eating of the Passover meal. John focuses on the words of Jesus and His washing of the disciples’ feet.

The name "maundy" comes from the words of Jesus, "Mandatum novum" ("a new commandment," John 13:34). From the Fourth Century on, Maundy Thursday, was viewed as the last day of the Lenten fast and also as the day of reconciliation (i.e., when those excommunicated could repent and be reconciled to the Church).3

Since it was on this night that Jesus instituted the Lord's Supper, that sacred meal has often been the chief emphasis of Maundy Thursday. The Lord's Supper is celebrated and often its meaning is rehearsed. At the end of the service, the altar is stripped, in preparation for Good Friday. This symbolizes Christ's being stripped by the Roman soldiers prior to His crucifixion. Psalm 22, a Messianic psalm which clearly prophesies the Messiah's death, is read while the altar is stripped. From ancient times the Church in various places has also observed a ceremony of foot-washing, in memory of our Lord washing his disciples feet on this night (see John 13). This liturgy of foot-washing came to be called mandatum.

The earliest evidence we possess points to the Pascha as the first of the annual Christian festivals. In fact, in the Second Century a. d. a church-wide split of staggering proportions almost occurred over the correct dating and meaning of the Pascha. The Christians in Asia Minor, citing the practice of the apostle John, bishop Polycarp and others, claimed that the Christian Pascha should be observed on the 14/15 of Nissan (the seventh day of the week), just as the Old Testament commanded (cf. Exodus 12). The rest of Christendom, including the bishop of Rome, Irenaeus, and the bishop of Jerusalem, held that the Pascha should culminate on the Sunday (since it was the day Jesus rose) after the first full moon after the vernal equinox. In the end the majority view won out.4 In recent years there has been a return in some quarters to a celebration of the Pascha, one festival celebrated over three days: Good Friday, Holy Saturday, and Easter Sunday.

What about the Easter Vigil? Already in the Third Century AD, Christians practiced a strict fast which ended after sundown on Saturday evening before Easter. After 313, the Vigil was the time for catechumens to be baptized. As such it also ushered in Christ's resurrection following Paul's linking of baptism with Christ's resurrection (cf. Romans 6:1-5). The theme of light conquering darkness is also prominent.5

Easter, the celebration of Christ's resurrection, is the queen of the Christian holy days. The word "easter" and the German "Ostern" come from common source, referring to the direction from which the sun rises. In other words, the word referred to the celebration of the spring sun, when all things returned to life. This symbolism was transferred to the resurrection of Christ who brings us new life. There is no evidence that the word "easter" was the name of a Anglo-Saxon goddess "Eostre." This is based on a passage in the writings of the Christian author, Bede, who in the eighth century erroneously ascribed the word to the goddess. To this day, no research has been able to find any mention of Eostre in Germanic mythology.6

As mentioned above, the earliest word for the annual celebration of Christ's resurrection was probably Pascha. As to the dating of Easter, this has been fixed ever since the Council of Nicea in 325. At Nicea it was decided that Easter would occur on the Sunday following the first full moon after the spring equinox, which occurs between March 22 and April 25.

Easter celebrates Christ's victory over sin, death, and the devil, as well as the promise of our justification and everlasting life. The season of Easter lasts 50 days until the day of Pentecost.

Holy Week is a marvelous opportunity for Christian growth. It offers incredible potential for satisfying spiritual hunger. It does this by exposing those who attend its services to God's Word and Sacrament. In other words, we grow in Holy Week not by imitating Christ's last days. We grow as the Holy Spirit works through the Gospel and Sacrament that we hear and receive during these days. This Holy Week, taste and see that the Lord is good!

1. Herman A. J. Wegman, Christian Worship in East and West: A Study Guide to Liturgical History, trans. Gordon W. Lathrop (New York: Pueblo Publishing Company, 1985), 175-176. However, it is also true that Palm Sunday was celebrated in various places much earlier than this. For example, Weiser points out that in the fourth century, the faithful in Jerusalem renacted Christ's solemn entry into Jerusalem, processing with branches and singing "Hosanna." See Francis X. Weiser, Handbook of Christian Feasts and Customs (New York: Harcourt, Brace and Company, 1958), 188-189.

4. We know so much about this Second Century controversy thanks to a Fourth Century father named Eusebius of Caesarea, who writes about in detail. See his Church History, V, 23-24. For a good discussion of the early Pascha, see Wegman, Christian Worship, 28-34.