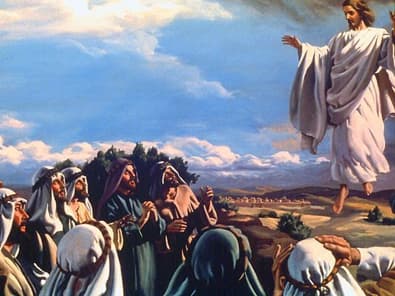 “He ascended into heaven and sits at the right hand of God, the Father Almighty. From thence He will come to judge the living and the dead.

These words which we confess each week in our creed are powerful words because they tell the end of a story that we began to tell in Advent. Jesus, the Christ, was conceived by the Holy Spirit, was born of Mary, lived and taught among us, was crucified for us, and rose again on the third day victorious over death, Satan, and Hell. Following his resurrection, he revealed himself to his apostles for forty days, until such time as he was taken into heaven on a cloud right before their eyes (Acts 1).

Our offertory during the Easter season has encouraged us to hear that “Christ victorious, rising glorious, life is giving. He was dead but now is living.” This week, however, we sing in our offertory:

“See, the Lord ascends in triumph; conquering King in royal state, Riding on the clouds, his chariot, To His heavenly palace gate.

And the portals high are lifted To receive their heavenly King.”

As we celebrate his ascension, “…though the clouds from sight received him when the forty days were o’er, shall our hearts forget his promise: “I am with you evermore”? It’s not really the end of the story, for Jesus promises to be with us until that final day when he will return on a cloud, just as he ascended. Christ has died, Christ has risen, Christ will come again!

Dr. Jeffrey Blersch is Director of Music at Pacific Hills Lutheran Church in Omaha Nebraska
Jeffrey Blersch is Professor of Music at Concordia University, Nebraska, where he teaches organ, music theory, and is the conductor of the Cantamus Women’s Choir. Blersch is a graduate of the Oberlin College Conservatory of Music where he received degrees in organ performance and music education, and of the University of Michigan, Ann Arbor, where he earned the Doctor of Musical Arts in Organ Performance.