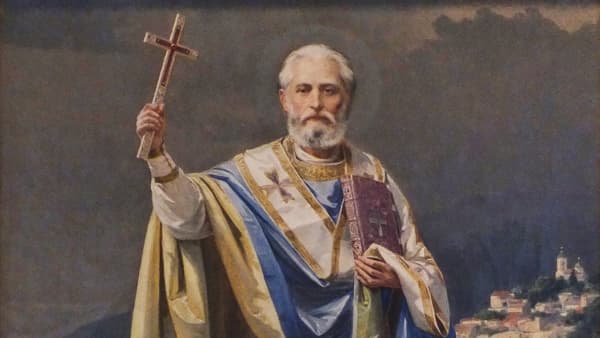 Did you know that St. Nicholas, the man who is behind Santa Claus in Western culture, dates to the third century? Every December 6 is remembered as St. Nicholas Day in cities all over the world, with the largest celebrations taking place in Europe. Images of St. Nicholas vary considerably, but none of them look much like the red-cheeked, white-bearded old man seen everywhere in our society today.

The original saint was a Greek born in the late third century, around 280 A.D. He became bishop of Myra, a small Roman town in modern Turkey. Nicholas was neither fat nor jolly but developed a reputation as a fiery, wiry, and defiant defender of church doctrine during the Great Persecution in 303, when Bibles were burned, and priests were made to renounce Christianity or face execution.

Nicholas defied these edicts and spent years in prison before the Roman emperor Constantine ended Christian persecution in 313 with the Edict of Milan. Nicholas's fame lived long after his death (on December 6 in the mid-fourth century, around 343). He was asso- ciated with many miracles, and gift giving and reverence for him continues to this day.

In the end what St. Nick has set down for us all is a lifestyle of service and going the distance for the Lord Jesus Christ. Whether it's staying the executioner's blade from the neck of three innocents, bailing out a man's daughters with gold from certain prostitution, or simply giving children gifts, St. Nick took his faith to the streets and made a difference-a worldwide difference-as a follower of Christ.