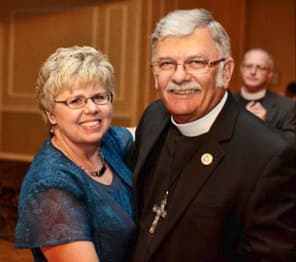 The Rev. Dr. Michael L. Kumm, is a retired LCMS pastor from Dakota Dunes, South Dakota. He currently serves as the Chairman of the LCMS Board of Directors, St. Louis, MO. Dr. Kumm has served churches in South Dakota and Southern Illinois as well as on the professional staff of Concordia Seminary, St. Louis, Missouri. While serving these local congregations, he has served his community as a law enforcement chaplain and has served as the District Pastoral Advisor for the Lutheran Layman’s League; Circuit Counselor and as a delegate to Synod conventions. Due to his expertise in the broadcast media, Dr. Kumm also served as the Interim General Manager of the Synod-owned KFUO radio station. Additionally, Dr. Kumm serves as Chairman of the Supervisory Board of the International Lutheran Society of Wittenberg (ILSW), a joint corporation of the LCMS and our German partner Church, the SELK.

Dr. Kumm graduated from Concordia Seminary, St. Louis, Missouri, where he also completed a Master of Arts degree in Practical Theology. He successfully defended his dissertation, “Pastoral Care and Theology in Strife-torn Congregations,” and earned his Ph.D. degree in Pastoral Theology and Apologetics from Trinity Theological Seminary, Newburgh, Indiana.

Dr. Kumm is a Vietnam Veteran and retired from the U.S. Air Force Reserve after 30 years as a Chief Master Sergeant. He is honored to serve with the Patriot Guard and the American Legion Riders motorcycle groups in honoring departed veterans and their families, by providing escorts and flag lines at times of funerals and burials. Dr. Kumm is married to Janet and has four children, five grandchildren and one great-grandchild.