Evening Hymns for the Close of the Church Year 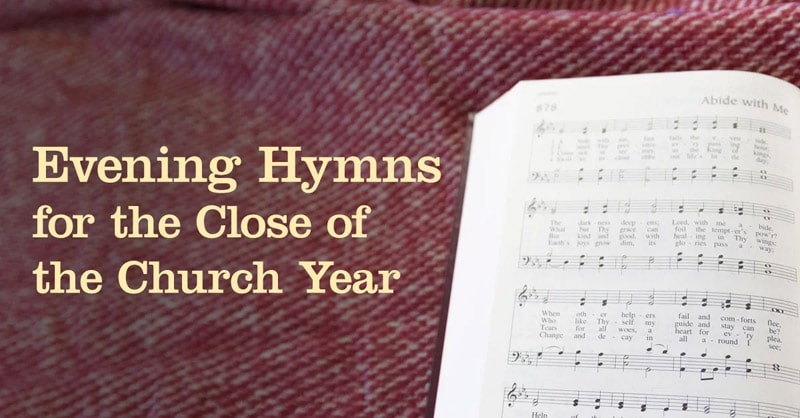 This article by Marie Landskroener originally appeared on the Concordia Publishing House Music website on November 20, 2018.

Abide with me, fast falls the eventide.
The darkness deepens; Lord, with me abide.
When other helpers fail and comforts flee,
Help of the helpless, O abide with me.
(“Abide with Me,” LSB 878, Stanza 1)

So was my family’s anthem nearly every evening when I was little. We made it our own with little added embellishments, as kids (and sometimes dads) are wont to do, and then scurried off to bed (always obediently and willingly, I might add—just don’t tell my mom I said that). Little did we know the preparation that was taking place, the ultimate preparation in life: we were preparing to die.

“Change and decay in all around I see”

That, you might be thinking, is morbid! Innocent children heading off to bed preparing for their deaths? Well, as I learned in American history, only two things in this life are certain: death and taxes. In all seriousness, though, if death is certain (unless, of course, Christ comes in our lifetime), then why should we not spend every moment preparing to die a good death? Why should we not be ready for it when it comes?

Death exists all around us. As the calendar year nears its end, we see death in every fallen leaf, every brown and wilted flower, every newly bare tree. In my apartment, I have an unfortunate number of dead houseplants and dead cockroaches. At school several weeks ago, my students had a hard time calming down after spotting a dead mouse on the driveway. And, of course, the news constantly alerts us to all of the more sobering events that show that death is very real, very terrifying, and very final.

As Christians, however, we have a glimmer of hope. In fact, our evening hymns (LSB 877–891) present a different narrative than the one above, a hope that death is not final, a comparison of death to our evening slumber. As children singing an evening hymn before bedtime, we were not merely sticking to a routine that helped us psychologically prepare for bedtime each night; no, we were priming our young minds to consider death as merely a sleep, a night after which we will rise with the glorious sun.

“I triumph still if Thou abide with me!”

These evening hymns reflect Jesus’ own words in Scripture when He tells those who mourn another’s death that their friend or son or daughter is not dead but asleep. And instead of saying empty words, Christ fulfills His promise when He raises the dead person back to life. This is a comment on our own deaths: we will not die but fall asleep and be raised by Christ again. If, as children, we sing bedtime hymns that give us this language, then we, as adults, are prepared to stare death in the face, are prepared to die without fear, are prepared to rise again.

And to prepare us to die without fear, the music of these evening hymns unfolds the texts in a comforting way, a gentle way. After all, at the hour of death, as at the hour of sleep, we need comfort, not terror—our earthly battle has already been fought and now we are ready to rest. There has already been time for thunderous, exhilarating music; now we seek a lullaby of assurance that we will indeed be raised again to live forever with God in heaven.

As the casket made its way down the aisle and out of the sanctuary at the end of the funeral, friends, family, and a large contingent of pastors filled the church with song. The man in the casket who had lost much of his memory late in life nevertheless retained his faith. This man, a pastor, had faithfully preached the reality of the hope of the resurrection, of life with Christ after death. As his grandchildren had sung so often at their bedtimes growing up, they now sang at their grandpa’s funeral, concluding with the final stanza in its realest sense:

Hold Thou Thy cross before my closing eyes;
Shine through the gloom, and point me to the skies.
Heav’n’s morning breaks, and earth’s vain shadows flee;
In life, in death, O Lord, abide with me.

Listen to a version of “Abide with Me” for solo instrument and keyboard.

Listen to "Abide With Me"

Hymn text is from “Abide with Me,” hymn 878 from Lutheran Service Book © 2006 Concordia Publishing House. All rights reserved.

Marie Landskroener is a music teacher at Immanuel Lutheran School in Alexandria, Virginia. She graduated from Hillsdale College with a degree in music and has worked and volunteered as a church musician for several years. When Marie is not studying, listening to, or performing music, she likes to read, run, and eat chocolate ice cream.